Many of us try to avoid failure. When doing so we often forget that we can learn from failure. I recommend learning from small failures in order to avoid the big epic FAIL.
Of course, it’s easier said than done. It takes a lot of practice to feel comfortable to fail. I did some practicing when playing Mastermind with my kids last summer. In Mastermind player A sets a four piece color code and player B should guess the code. There are six possible colors which means that you have 1296 possible combinations. After each try, player A gives clues to player B. A black peg means one of the colors is correct and in the right position. A white peg means the color is correct but in the wrong position. When playing, player B needs to learn from failure since it is highly unlikely that the right combination is guessed.

In Mastermind success means that you find the right combination of colors. On the way towards success you allow yourself a number of small failures. The benefit of the failures is that they come with learnings from the clues you get.

In Agile product development the practice to inspect and adapt is frequently applied. We allow ourselves to run small experiments where failure is a possibility. We then inspect the results and if it was a failure we try to learn from that by adapting.

The challenge I see many individuals, teams and organizations struggling with is to allow themselves small failures to avoid the big failure. If we don’t allow small failures it is likely that we will run into big failures.

There are different ways of addressing the challenge. Two ways we find in Lean. Kaizen, small changes towards continuous improvement, and Kaikaku, which means radical change. Often it takes courage to do Kaikaku. It is important to remember not to use Kaikaku too often. It is also important to remember to combine Kaikaku with Kaizen. (You can learn more about Kaizen and Kaikaku here) 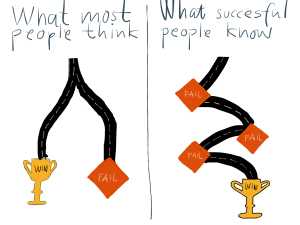 In order to be able to learn from failure we need to take the drama out of failure. The best way I know to do this is to run controlled experiments where a possible failure will not hurt us badly but rather help us learn for the future. A good friend and former colleague of mine told me yesterday that he calls it a mistake whenever he is learning from a failure. It is only when he does not learn from a failure that he really calls it a failure. Other ways of dealing with this is to say ”I have not yet learned to master this issue” instead of calling it a failure. That way you can turn failure into a matter of learning instead of feeling bad about it. If I’ve not yet learned to master a practice I have an opportunity for learning. And learning from small failures to prepare for the big future success is my initial recommendation.

I’m not the only one advocating to learn from failure. I’ve found numerous quotes and illustrations on the subject. My favorites are:
“I have not failed. I’ve just found 10,000 ways that won’t work.” ― Thomas Edison
“The only sure way to avoid making mistakes is to have no new ideas.” ― Albert Einstein
”You don’t learn to walk by following rules. You learn by doing and by falling over.”  ― Sir Richard Branson
”I’ve failed over and over and over again in my life and that is why I succeed.”  ― Michael Jordan

If you are interested in this subject I recommend reading the book ”Adapt: Why Success Always Starts with Failure” by Tim Hartford

Do you have a strategy to learn from failure? Please share in the comments.

This site uses Akismet to reduce spam. Learn how your comment data is processed.